Christmas Traditions and Customs from Around the World

Nothing beats the atmosphere of Christmas – the smells, the sounds, the lights – it’s simply magical. No matter where you come from, it’s likely you have sort of tradition that you follow around the holidays, from sledding to movie nights.

Often these traditions evoke comforting nostalgic memories that make us feel closer to our loved ones during the holiday season. There are lots of Christmas traditions worldwide and depending on where you’re from you might be more familiar with some than others.

So, if you’re looking for some new ideas for your family, or perhaps you’re enjoying that hot cocoa by the fire and looking for the next fun idea; here are some of the Christmas traditions enjoyed around the world.

Fun fact! Family rituals can be beneficial to your health. It’s true! Engaging and reliving experiences with our nearest and dearest boosts our mood and enhances enjoyment.

Hop on as we discover – what are some Christmas traditions from around the world? 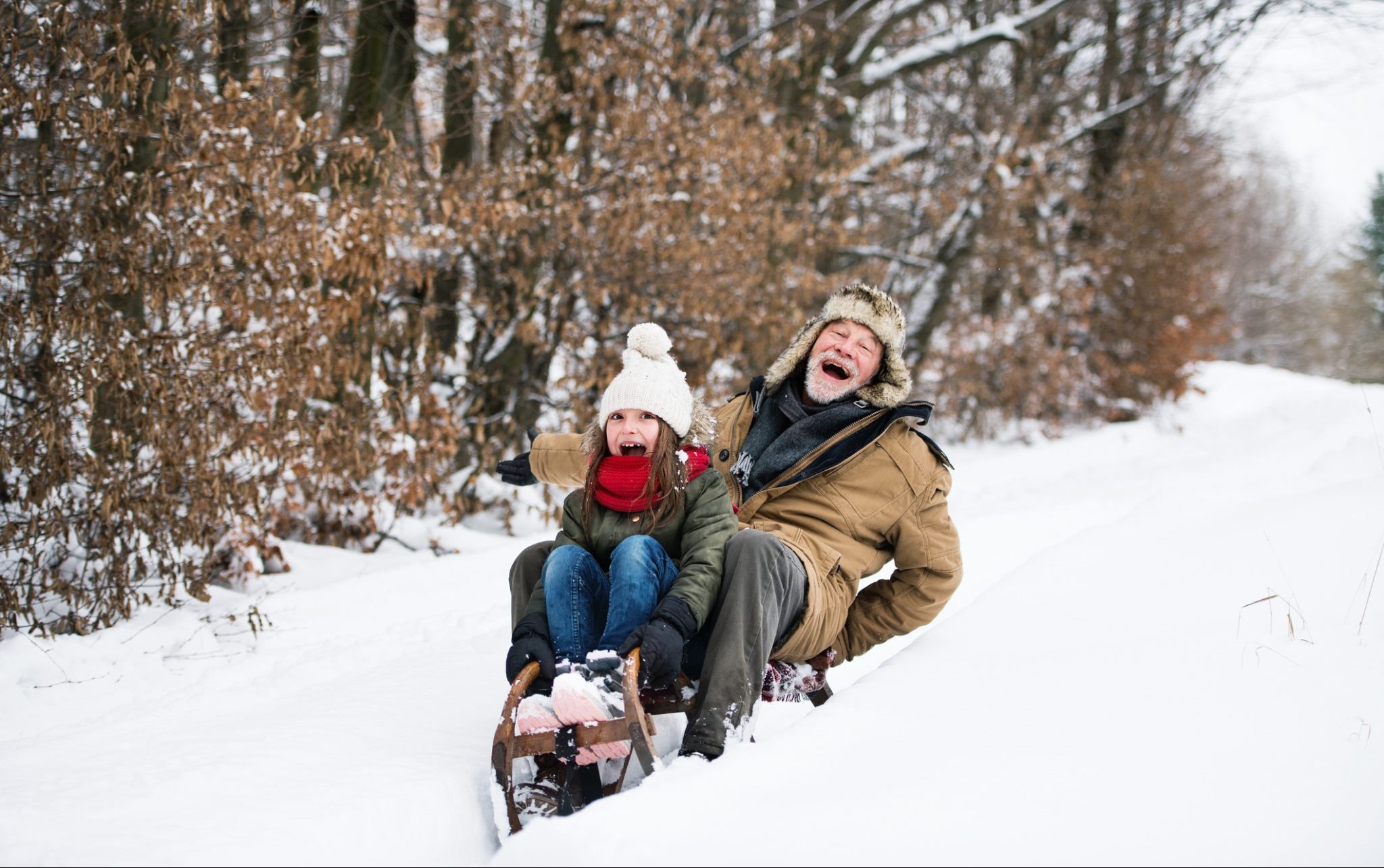 The first stop on our merry ride is the good old USA. Now, don’t be tricked by those Hallmark movies (a wonderful tradition for a cold night in), Christmas in the US is influenced by its multi-cultural background, making it not only a religious celebration but one of connection and coming together – a Christmas melting pot of unusual and weird traditions.

Here you can see a wide variety of traditions joining for the festive season. Including the Western European inspired turkey/ham dishes with a generous helping of gravy, the Eastern European influenced cabbage and sausage dishes, or even Mexican inspired ‘luminarious’ lights.

What’s not to miss, however, is the decorations! Christmas is an all-out celebration to make merry and decorate your house like a fairytale kingdom.

In the USA, you can also enjoy traditional carol singers, religious services on Christmas Eve and Christmas Day, and participate in the sending of Christmas cards.

The US is also the home to the Christmas cookie tradition, so be sure to leave a tasty one out for Santa, alongside a glass of milk, on Christmas Eve. 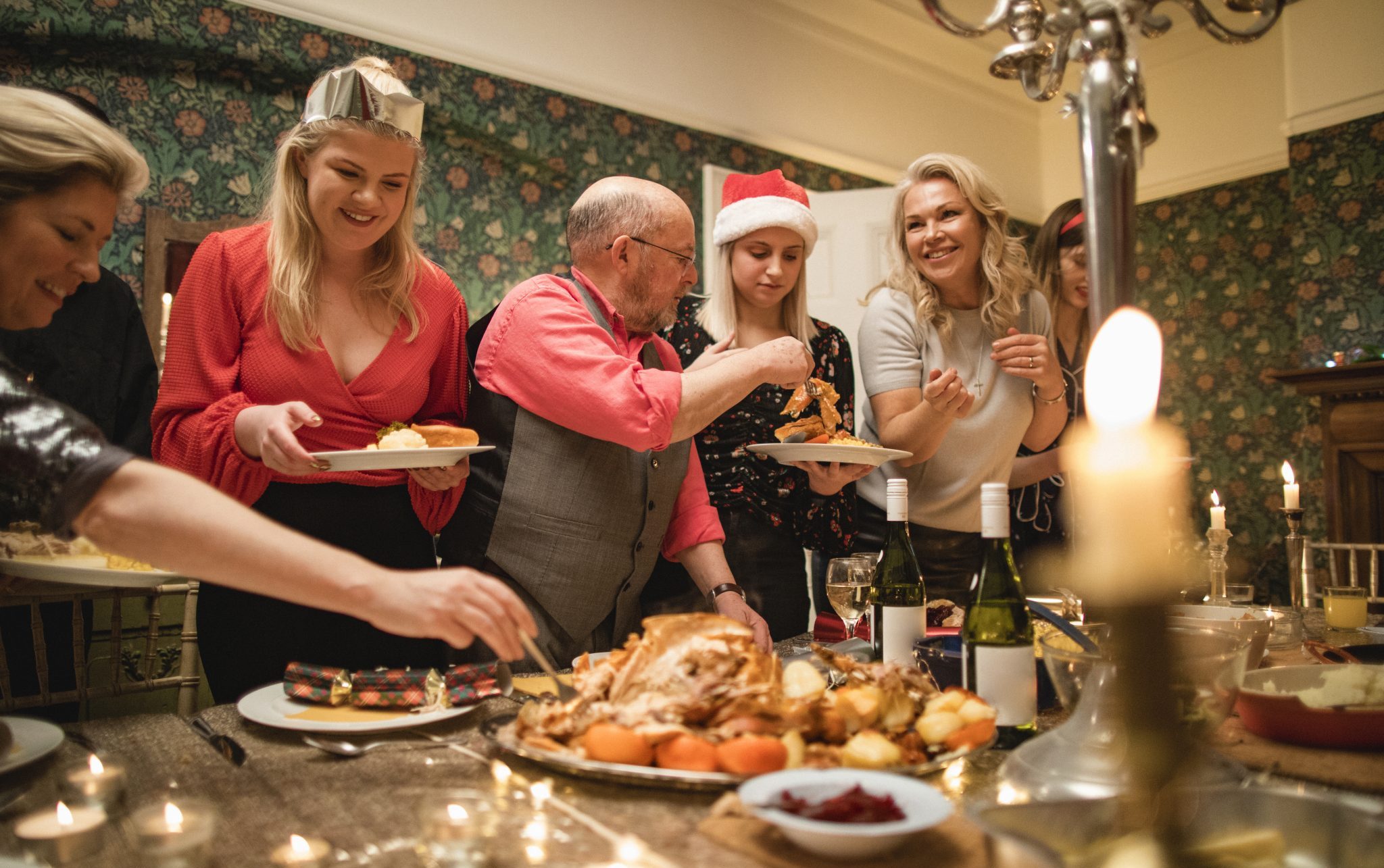 And just like that, it’s time to skip over the pond to the UK. Another Christmas wonderland, if you visit the United Kingdom from November onwards, you’re likely to be faced with Christmas fanatics getting ready for the holiday season.

Along the streets and in the windows of houses, you’ll see beautiful Christmas trees decorated to suit the taste of the resident. This was originally a German tradition brought over to the country by Queen Victoria’s husband, Prince Albert, in the 19th century. Today, it’s a stable the British can’t live without.

The celebrations often start on the 24th December, Christmas Eve, when children leave treats out for Santa. Depending on where you are from, this can be milk and cookies, or a cheeky glass of beer (or whiskey) and a mince pie.

Speaking of mince pies, these aren’t mince from an animal; instead, its ‘mincemeat’ a mix of dried fruits in a little tart case.

Christmas morning is a time for present opening, so see if Santa’s been to visit by sneaking into your living room super early and get ready to be surprised.

At lunch, it’s time to join in for a traditional Christmas dinner. You’ll find yourself stuffed to the brim – it’s a tradition! – and in need of an after-dinner workout. Starters usually include a soup, melon, or shrimp, followed by a calorie-packed main course of roast and mashed potatoes, roast meat, veggies, Yorkshire pudding, and gravy!

After all that feasting, it’s time to settle down, spend some time with the family and watch a few good movies. You might also watch the Royal Christmas Message, an annual event where Queen Elizabeth addresses the nation – a tradition since 1932! 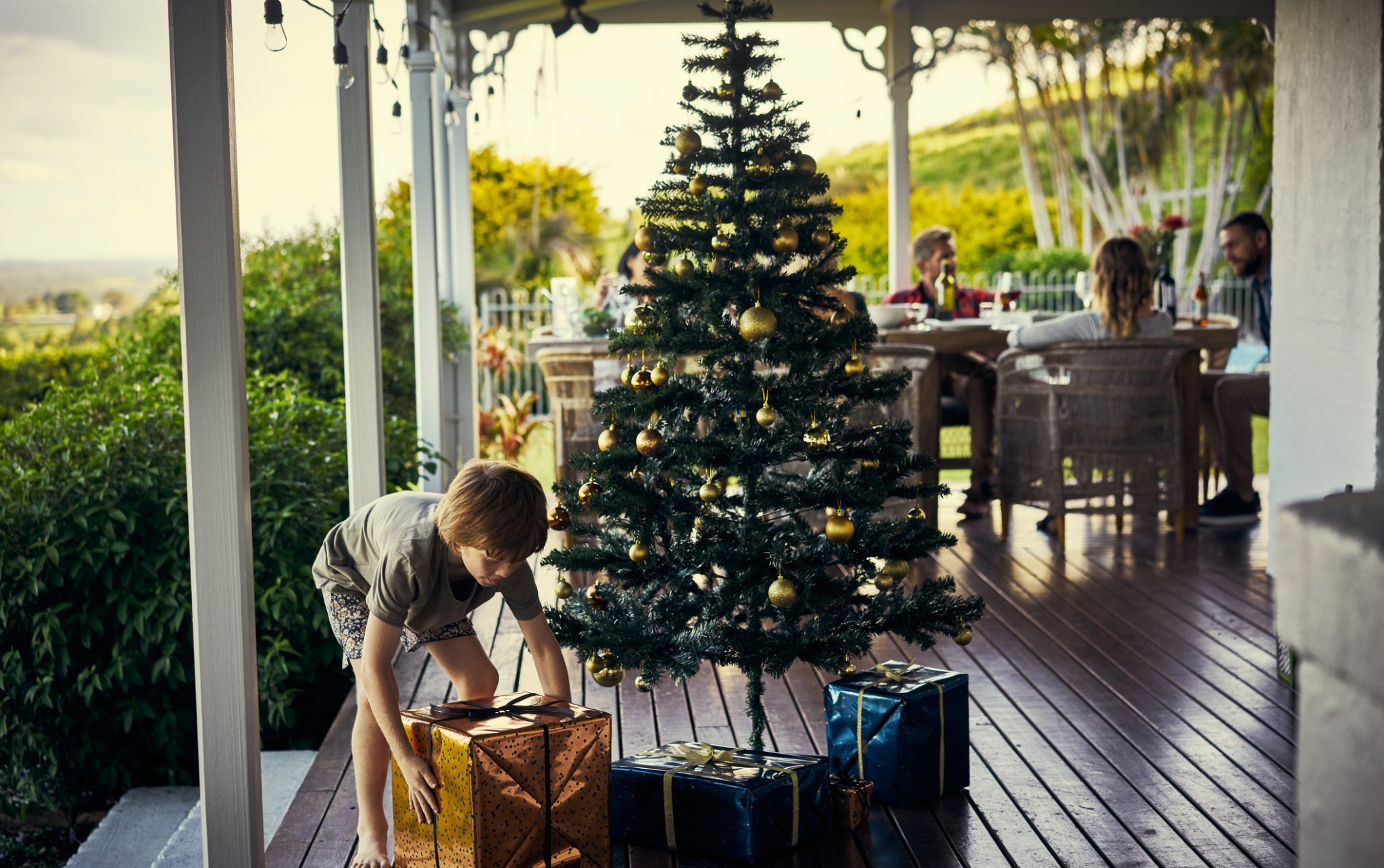 Forget the snow as we head on over to our next destination. In Australia, Christmas is celebrated on December 25th, but for school children, that’s the summer holidays.

Just because it’s bright and sunny outside, doesn’t mean it’s an excuse not to go all out on the decorations. Like the US and UK, Australians love decorating their houses this time of year.

Christmas dinner? Due to the hot temperatures, it’s quite common to find Australians outside cooking on the barbie (BBQ) with prawns and lobster as popular dishes.

Santa will still make it tough to all those lucky children who’ve been good this year. His traditional Australian treat? Some cake and a nice cold beer, after all, he must be sweating in that suit. 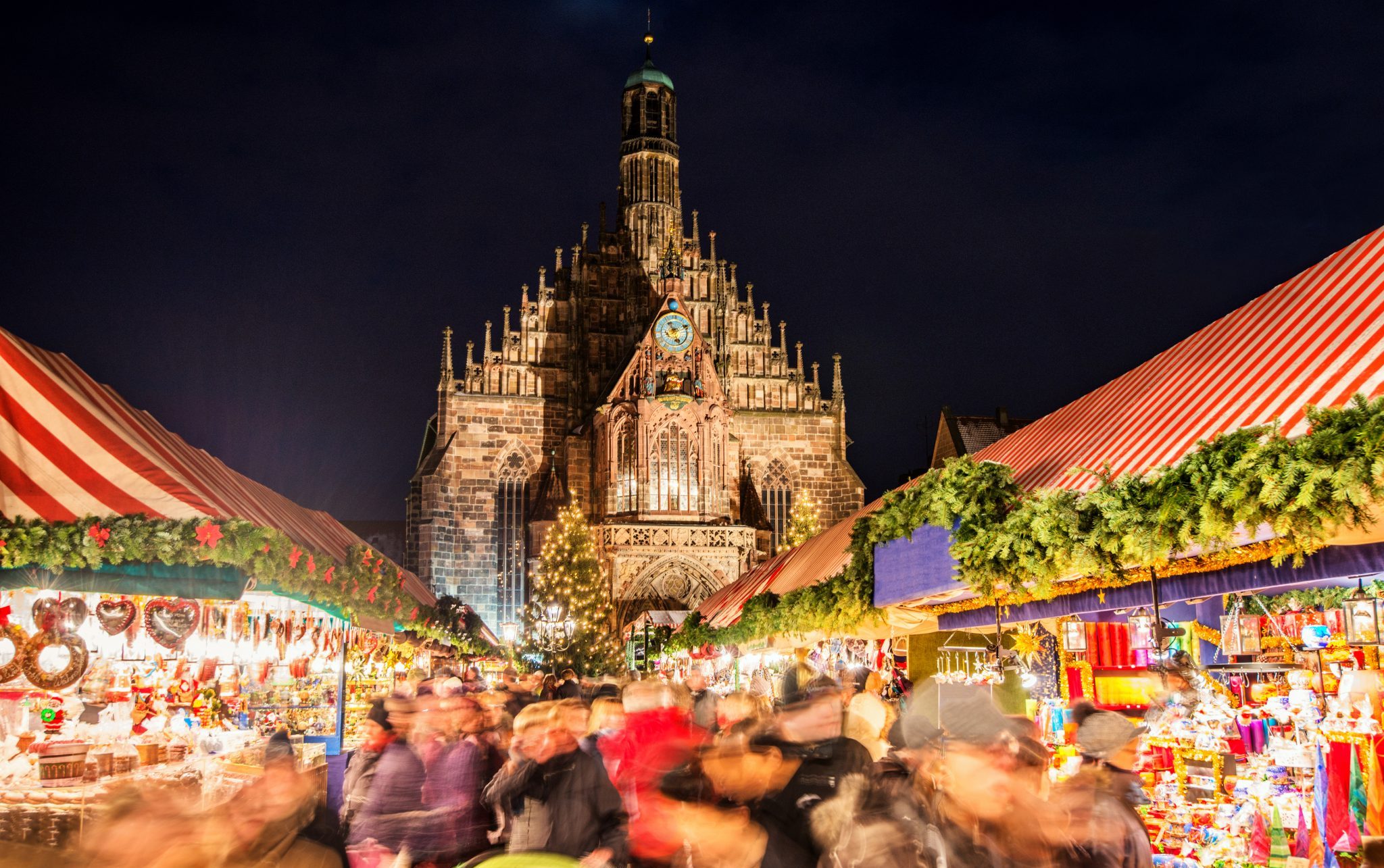 In Germany, the lead up to Christmas starts with Advent – the countdown to Christmas. Traditional varieties used candles to light the tree or present boxes hanging from it, but today you might also see store bound Advent calendars. Perfect for chocolate-loving kids and adults alike.

Across the country, Christmas markets are a familiar and festive site and host a variety of seasonal wonders, from decorations to delicious food.

Before we even get to the main event, on 6th December, Germans celebrate St Nicholas’ Day. On the night of the 5th, children leave their shoes by the door, and if they behaved, St Nicholas will fill them with treats. But, if not, they might just get a visit from his not-so-nice sidekick, Krampus, who teaches naughty children a lesson.

Like most Europeans, Christmas is celebrated on the 25th of December as a family holiday, but it’s the 24th (Christmas Eve) when families get together to exchange gifts.

This is also the night when Santa Claus, also known as Father Christmas, delivers his gifts to good children. 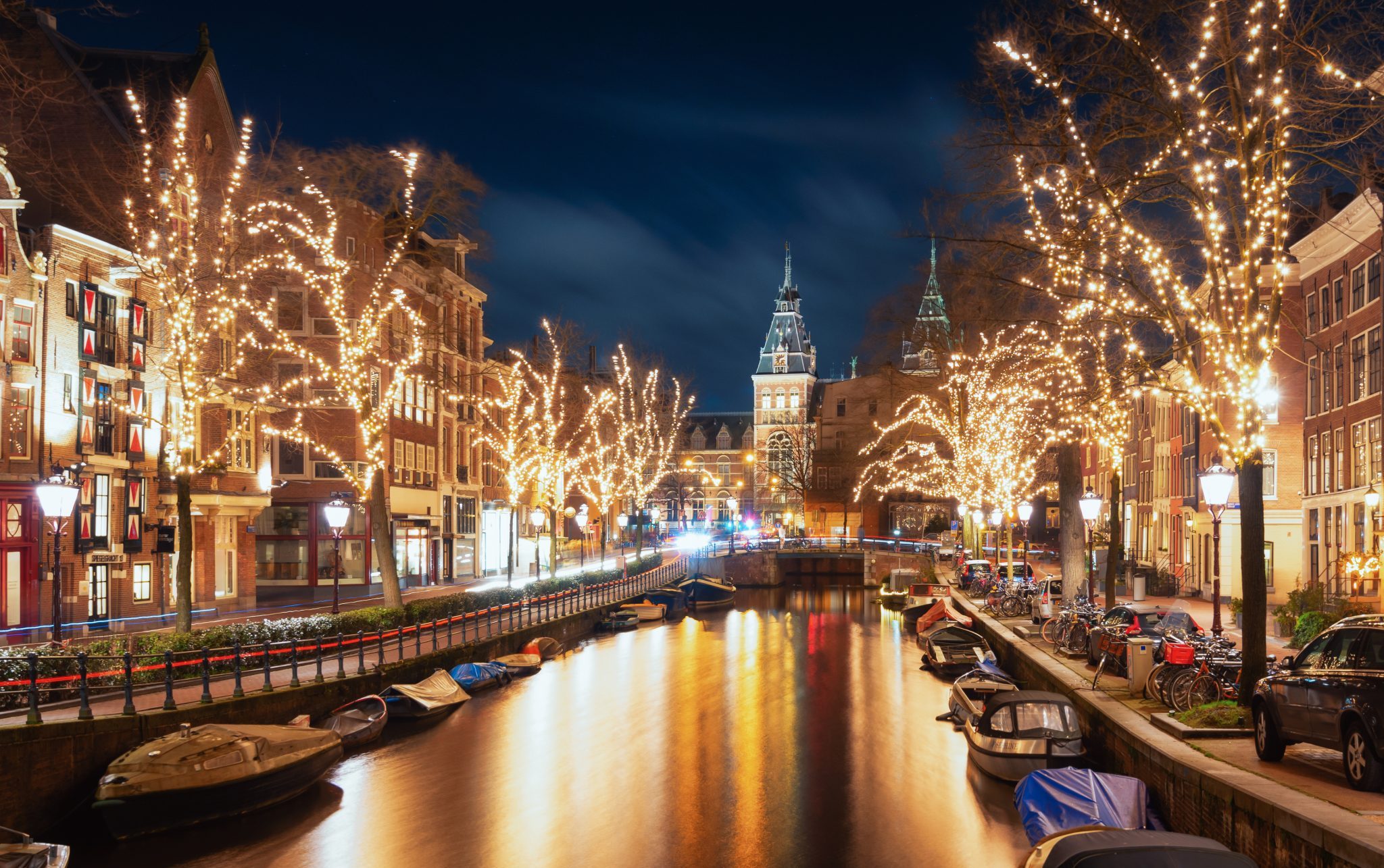 From Germany, it’s only a small ride over to The Netherlands. Like their neighbors, in the run-up to Christmas, the children of The Netherlands await a visit from Sinterklaas (St. Nicholas) on 5th December in preparation for this name day on the 6th.

Traveling from his traditional homeland of Madrid in Spain, St. Nicholas undertakes his journey with ‘Black Peters’ (Zwarte Pieten), who help Sinterklaas keep a list of all those who have been naughty or nice.

If a child wasn’t well behaved during the year, as the story goes, Zwarte Pieten will take him or her off to Madrid for a year to learn how to behave.

During the Sinterklaas celebration, parties are held in classrooms across the country, and special biscuits, called ‘letter blankets,’ are eaten. These are a tasty treat made from marzipan or pastry.

Moving on, the Christmas celebration isn’t such a main event in The Netherlands; instead, it is a quieter affair focused on church and family.

But that doesn’t mean Santa Claus doesn’t deliver presents, on Christmas Eve he makes the special journey from his home in Lapland to do just that. 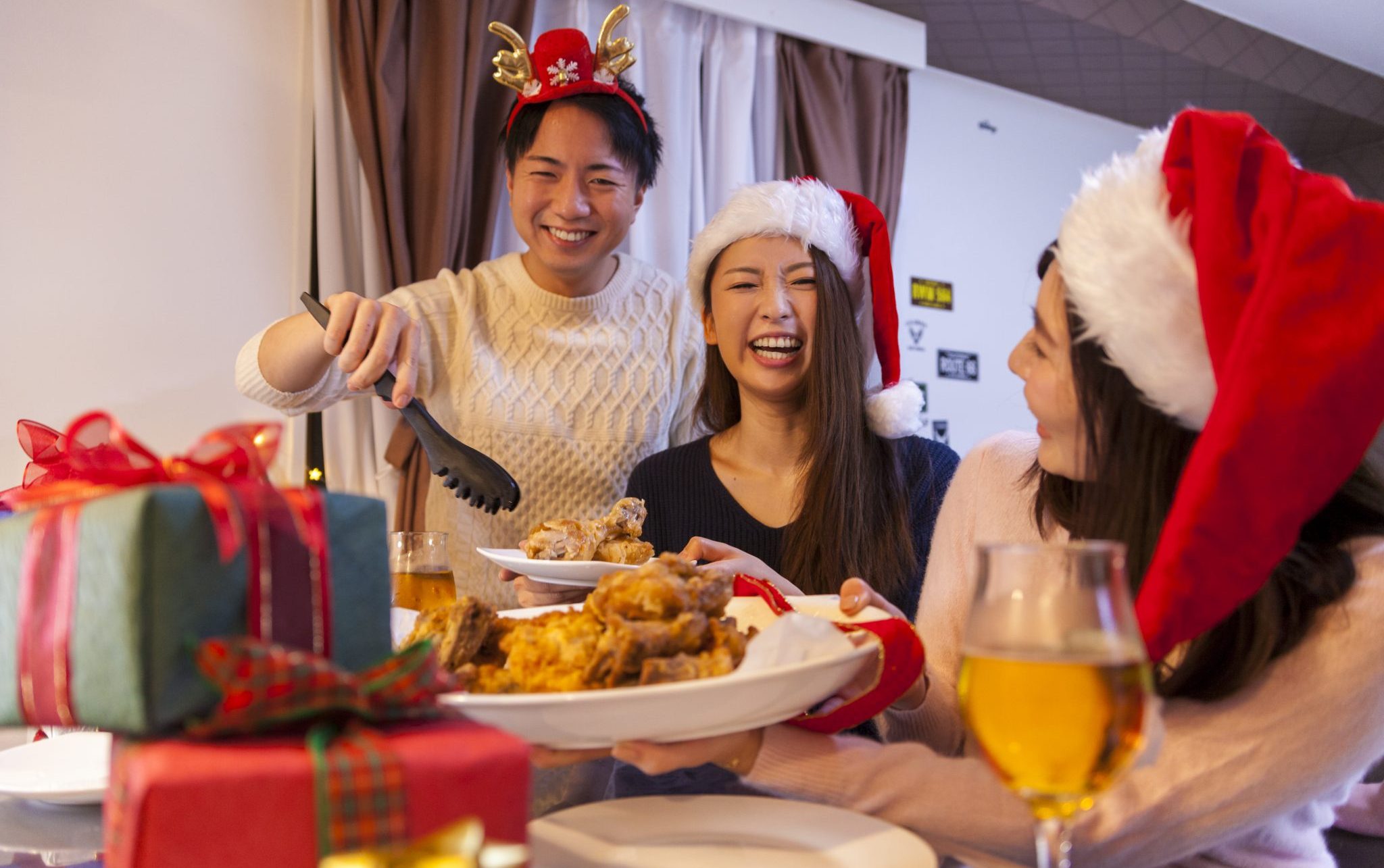 Still a relatively new holiday in Japan, Christmas here isn’t strictly considered a religious holiday and indeed has imported many of the traditions from the US and the UK.

Instead, it’s a time to make merry and have fun!

The ‘traditional’ food? Fried chicken! This dates back to a 1970s advertising campaign from KFC that soon became instilled in culture. Other than that, a light Strawberry sponge cake is also popular among the Japanese to eat at this time of year. 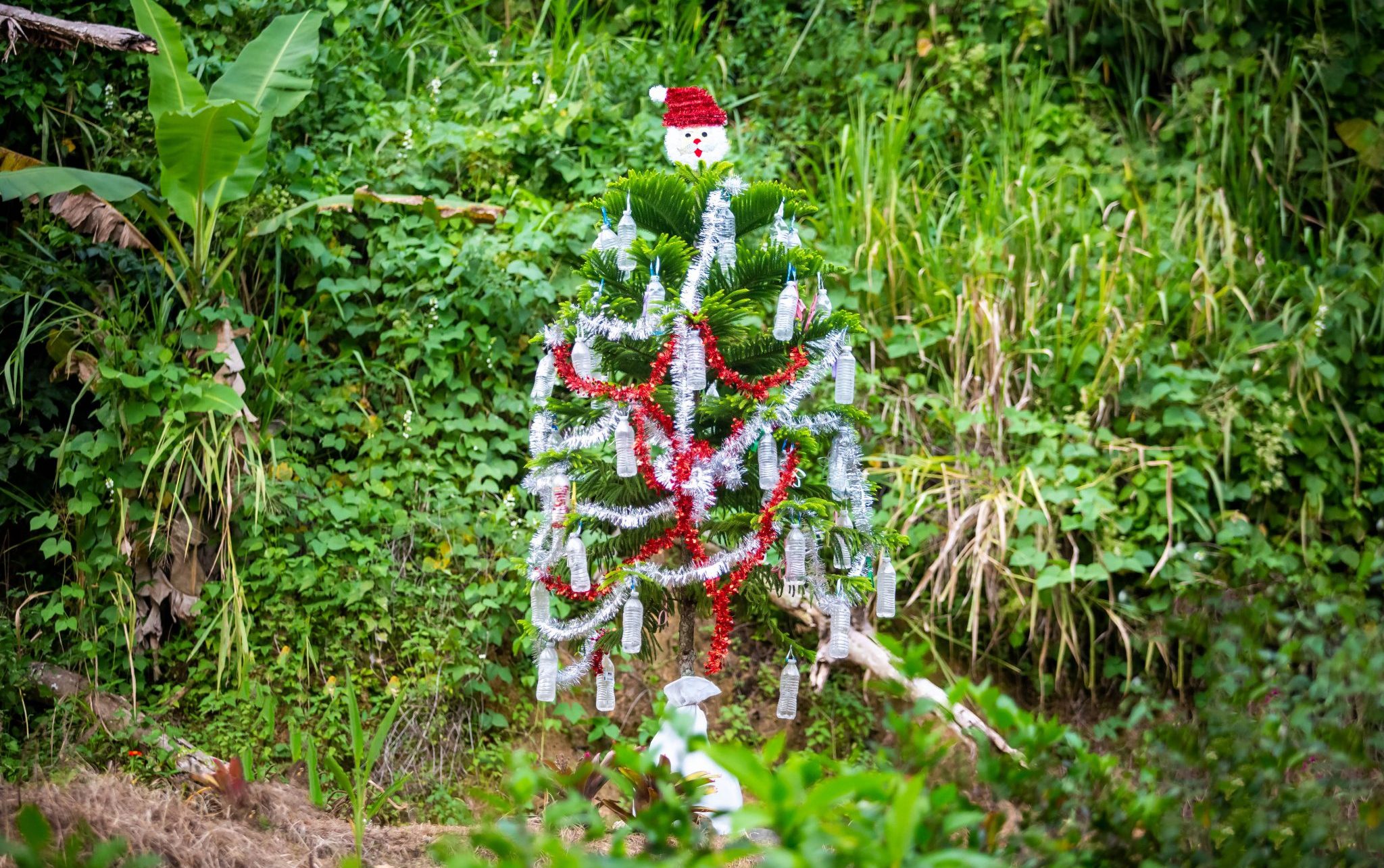 Taking our sleigh all the way from Japan and across to Jamaica. Here the residents celebrate with traditional Christmas Carols, decorate their houses, and in general, use the holiday to spend time with friends and family.

Like in Germany, Jamaicans hold a ‘grand market,’ held on Christmas Eve, a place to make merry, and an exciting, magical place for children. Here you can lots of goodies from toys to sweets to Christmas foods.

But that’s not all. This is a place for celebration. In the evening you’ll find a party! People of all ages come out to enjoy the festive atmosphere and simply spend time together.

And after all that merry-making, it’s time to head off to evening mass and then home to prepare the feast for the following day – delicious turkey, chicken, and rice and peas are traditional.

But before we get to the main dinner, breakfast itself is a delight of breadfruit, boiled bananas, sailfish, and ackee.

And don’t worry, Santa hasn’t forgotten to stop to bring presents either. 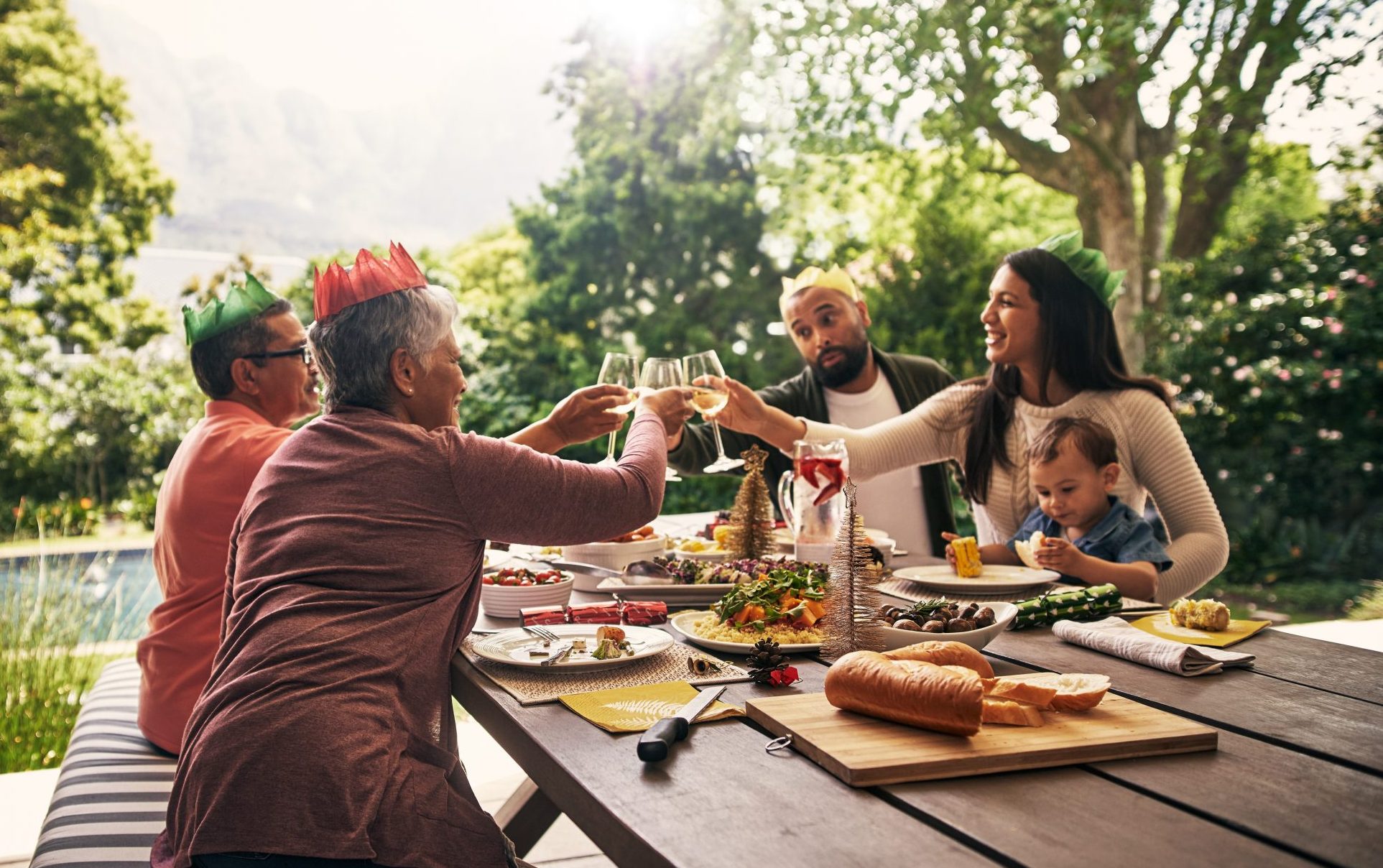 On the sleigh ride over from Russia, Santa has changed out of his wooly trousers and into his summertime shorts. In South Africa, Christmas is celebrated during the hot season.

Because of the country’s history with the UK, you’ll find lots of similarities in its traditions.

On the 25th, Christmas Day, a traditional meal of meat (turkey, duck, or roast beef) is eaten, alongside rice with raisins and a serving of vegetables. Unlike the UK, however, you might find this meal cooked outside, similar to an Australian BBQ.

Verv: Home Workout Planner
Get an all-embracing solution for your health and well-being with just one app
#Christmas#Food#Mindset#Motivation
Written by Verv Experts
We are an integral part of the Verv team, the articles we create are the result of a collaborative effort. We are happy to share our experience and discoveries...
View all articles