Weight Loss Running by Verv
Verv Inc.
GET — On the App Store
Install

Doctor Talks Benefits and Controversy of Working Standing Up

You’ve probably heard about working in a standing position. These days this alternative to sitting is getting more and more popular. One of its undeniable benefits is that you put large muscle groups to work, boost your metabolism and burn more calories in comparison to when you are sitting. Furthermore, when you work standing, you go easy on your lower back – it’s under two times less pressure than when you sit at your desk.

Interestingly, when you look back at history, you learn that many renowned people preferred to work standing up. Among history’s famous standers were Nikolai Gogol, Ernest Hemingway, Winston Churchill, and many others. Peter I of Russia preferred to do everything standing up, Napoleon, Mendeleev, Gogol and Pushkin, and almost all people until the early 20th century did without chairs, because many schools during that period often didn’t have any sitting arrangements.

Stand-up desk in a nutshell 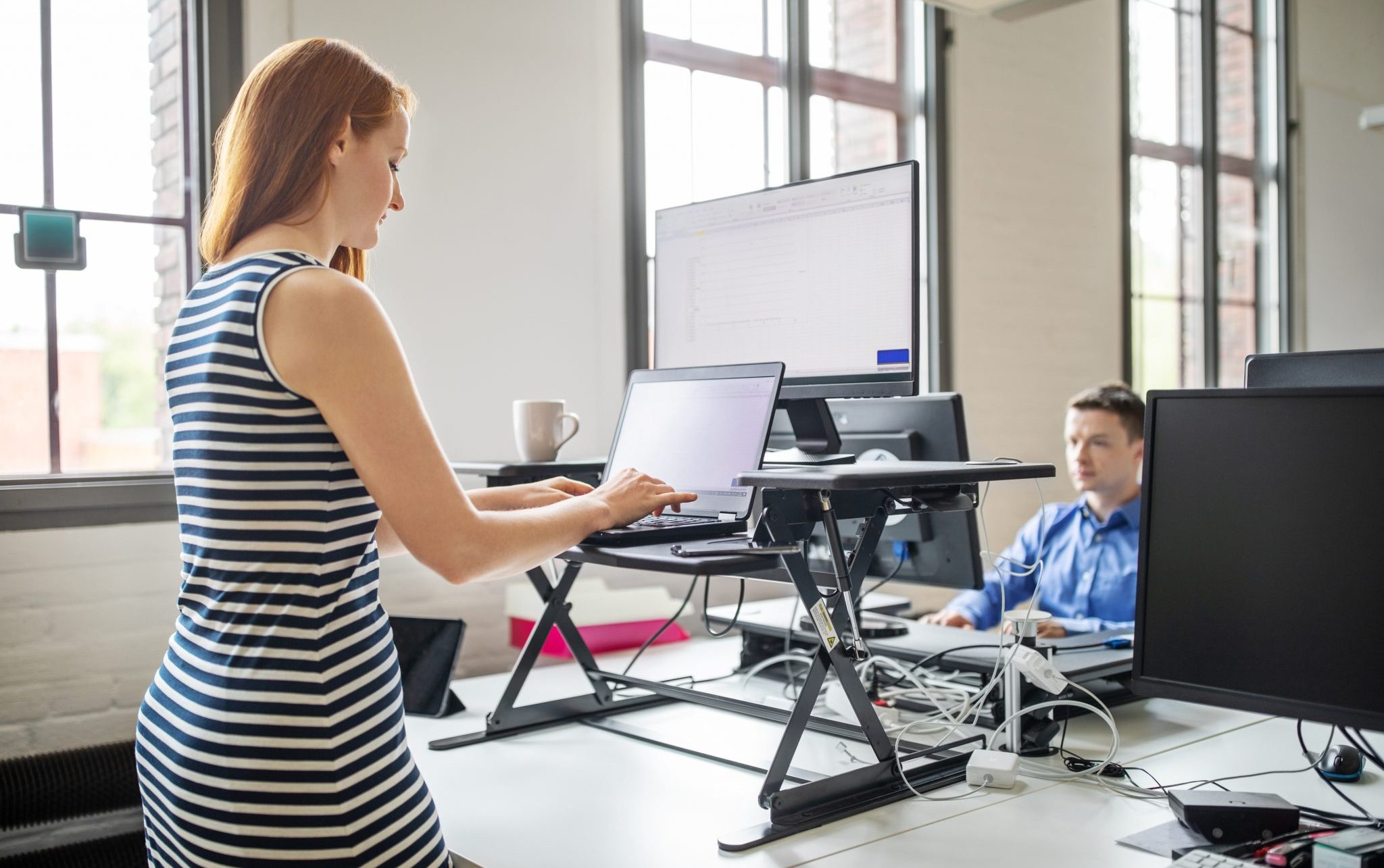 A stand-up desk is a piece of furniture which is usually a part of your study or an office.  Basically, it is a high writing table at which you can draw, write, embroider and do a myriad of other things standing. Simply put, the stand-up desk is a high table. And it is so high, there’s no way you can sit behind it. At one point, people believed that an upright position was the only way to maintain good posture. That’s why private school students did their homework standing behind their desks at all times.

The only thing that reminds us now of the desk that once existed, is a lecturing desk, behind which professors give their lectures while standing. But the world is constantly changing, as well as it changes back. And so, what we witness now is a stunning comeback of the stand-up desk in the Western world.

It goes without saying that a chair can make you suffer, meaning that sedentary work is dangerous, you can even hear some people refer to it as the new smoking. A decade ago, American doctors even came up with an expression: Sedentary Death Syndrome.

Where do you start?

It is quite simple. You can make your very own test version of a stand-up table in under 5 minutes. Put a small stool or an upturned chair on the table, and a flat sofa pillow on top of this construction. You can work with elbows on the tabletop. That’s why it is important that the tabletop is located at a comfortable height.

There are ready-made solutions, of course. The most obvious example is Bekant table from IKEA. The table is easily adjustable – at any time it can be either lowered or raised higher. It is designed after a study that found that sedentary work is very harmful to the spine.

Benefits of standing vs. sitting at work

What should you stand on?

1. On an anti-fatigue standing mat

Standing comfort mats help people endure long hours of standing at work without any unpleasant consequences to their health. They help ensure you always have a firm and safe footing, and are usually made from durable rubber.

This is an advanced option. Of course, it’s pretty hard to focus this way, but it’s totally doable to complete some routine tasks while walking or running on a treadmill.

People who prefer to stand at work

More and more people prefer to do their job standing. Australia has recently become a pioneer in introducing stand-up desks to their workplaces in a large-scale movement. Denmark is not that far behind, obliging employers to provide standing workstations to their employees, if the latter want them to. The USA and Japan are making noticeable progress in that direction as well.

Install This App to Build Up Your Cardio
Running is a great way to pump up your endorphins! It keeps you sharper, healthier and happier.
#Motivation#Posture#Recovery
Written by Andrei Beloveshkin, MD, PhD
Andrei is an MD/PhD, research scientist, Associate Professor and opinion leader. He is the host of numerous health and wellness workshops on nutrition,...
View all articles

Health
Audra Bajori
Is There a Way to Get Rid of Under Eye Puffiness for Good?
Install This App to Build Up Your Cardio
Running is a great way to pump up your endorphins! It keeps you sharper, healthier and happier.
Verv
About Us Careers Contact Us Our experts
Products
Move Mind Sleep All-in-one
Blog
Lifestyle Health Activity Nutrition Mind
Help center
FAQ Privacy Policy Terms & Conditions
© 2022 Verv Inc. All Rights Reserved
By using this website you agree to our Cookies Policy
Access error
Only registered users can rate this website
ok